A couple of weekends ago I took a trip to Cuc Phuong National Park in the Ninh Binh region of North Vietnam.   The park is around 120km from Hanoi and takes around 2 1/2 to 3 hours to get to by bus.  As there was a group of us we booked a private tour with a freelance tour guide named Den.  All information on our tour can be found here.  We paid around 750,000VND ($32) each which included transport, lunch and admission to the park and rescue centre.  This is on par with other day trips such as the Perfume Pagoda and so quite reasonable.

The journey to the park was pretty direct on primary roads but the last leg took a turn.  As the roads became slightly more bumpy the landscape too changed; rice fields became more and more frequent, more traditional Vietnamese houses appeared and the area was littered with animals grazing.  The misty weather 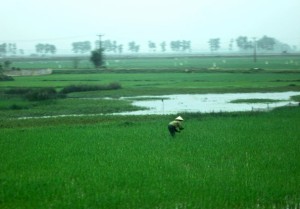 rather than spoil the view actually enhanced it giving it an almost secret garden-esque feel.  The bus was hushed as people either slept or gazed out the window in awe.  The green of an undisturbed rice field contrasted with the rusty red banks is absolutely breath-taking.

And that was just the drive in.

We arrived at the park at around 11:30am and had lunch shortly after.  We had quite a selection of spring rolls, omelette, sticky rice, chicken, barbecued pork and tofu which was definitely needed before we took off on our first activity;

a 7km walk to see the 1,000 year old tree (Cây chò ngàn năm).  The 3 km trek there was mostly uphill and an absolute killer if you’re in anyway unfit.  But at the very least it was doable.  Whilst there our guide informed of the influence of different languages on Vietnamese.  English and French had quite an effect, being introduced as official languages in the country, but Chinese had the most lasting influence with Vietnamese being quite similar to it.   We had two options for the returning walk; go back the way we came or go a different way but walk an extra kilometre.  We chose the latter, stupidly not questioning whether the route was up or down hill.  It was up.  Up. Up.  And then precariously down on the muddy version of a slip and slide.  To be fair it had been raining the few days previous so I presume usually this route is pretty safe.

The next part of the tour was a quick visit to the Cave of Prehistoric Man which dates back 7,500 years.  The trek up to the cave was a steep but short climb.

At the mouth of the cave, similar to many ancient spots around Vietnam, there are a number of small shrines decorated with incense.  Further inside the cave is small and about as exciting as you’d expect the inside of a rock to be.

The final part of the trip was the eagerly awaited trip to the Endangered Primate Rescue Centre.  We were greeted by our guide at the gate but were distracted by the huddle of people to his left.  He quickly explained they were preparing leaves for the monkeys, something which is done 6 times a day,

The centre takes care of a number of endangered primates such as the long tail langur, the black langur and the white headed langur (known also as the Golden Cat Langur) with wild numbers of 250, 1,000 and 65 respectively.

What really struck me about this was how noninvasive our visit was.  It didn’t have the feel of us attending it for the sake of our own amusement or entertainment, rather of something with the intent of being very educational and thought-provoking.  The visit lasted all of 20 minutes and we were gone.

The Park also has turtle and pangolin conservation centres which are open until 4:30, which we didn’t get around to this time but from what I’ve heard are well worth the visit and only cost an additional 15,000d each.

The National Park was established in an effort to combat the destruction of wildlife in Vietnam, especially for the purpose of plant medicine and designer pets.  Whilst we still see such trends existing, it’s comforting to see that the other side are doing all they can to prevent it. 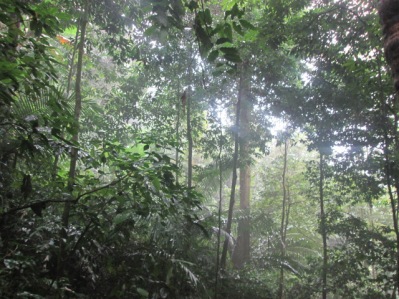 One thought on “Day Trip to Cuc Phuong National Park”