Seeing as I was already on the other side of the world I thought I should take advantage and do some travelling before I came home.  I limited myself to 3 weeks as I was very eager to be home and it also meant I could bring back some savings.
I had 4 countries to hit in 21 days so I had a pretty rigid schedule.

Although I would have loved to travel with the friends I made whilst teaching the stars didn’t align, we went our separate ways and I decided to brave solo travelling.  The thought of doing this was, of course, daunting until I got going and settled into a rhythm.

I spent my last day in Ha Noi packing for travels and flew south to Da Lat later that evening.  A shuttle took me from the tiny airport to a hotel near the town and a taxi brought me the rest of the way.  I picked Mooka’s Homestay and was very pleasantly surprised when I arrived.  Not that I didn’t love the homestays I’d been at previously but Mooka’s was completely different, modern with a bistro style front room. The bedrooms mirrored this style with nice bunk beds made private by curtains separating them. I had arrived too late to join the family and other travellers for dinner and so upon recommendation set out in search of the Lien Hoa Bakery just minutes from the homestay.  Tired, hungry and just a little bit creeped out from walking around a new city at night I had begun to lose hope when all of a sudden I found it.  Lien Hoa, a gem of a patisserie on an otherwise dull street.  Demonstrating my limited Vietnamese I ordered a chicken baguette (banh mi gà). Minutes later I was pleasantly surprised that my poor language skills had landed me a tuna roll (banh mi cá) instead.  The words for the two sound ridiculously similar unless you have the tones perfect!  Wrecked from a day of travelling I retired to my bed early only to be kept awake most of the night by someone snoring.

The following morning I got up fairly early in search of something outdoorsy. I rented a bike from my homestay with the intention of following a recommended route; one that would take me around a beautiful lake, past a waterfall and back again to the homestay.  This did not go to plan to say the least.  After ages of cycling I was so close to giving up when I caught a glimpse of the lake and wow was it worth it.  I pushed forward and miraculously found somewhere for lunch.  After ordering rice and veggies I sat back, somehow connected to Wi-Fi and called my boyfriend while overlooking this spectacular view.  Unfortunately that was where the good part ended.  I spent the next 2 days in Da Lat burnt to a crisp and feeling like some kind of disgusting reptile due to the tortuous slow ride back in the blistering sun. 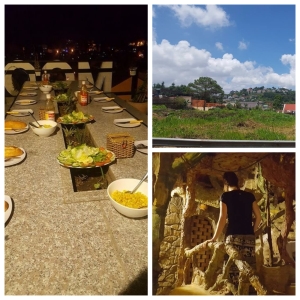 Despite the sunburn I did manage to meet some fab English girls at the dinner that night and joined them on the hunt for Da Lat’s famous Maze Bar.
To be fair it was really cool, if not a little pricey.  We sat in a little snug area, got lost inside the bar and exchanged Asia stories! 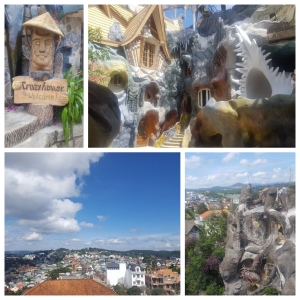 My final day in Da Lat was spent chilling out and exploring the Crazy House. The house is like something out of a fairytale/kids show.  The architecture is unbelievable and you could spend hours exploring.  I rounded off my trip with an amazing rooftop barbecue cooked by the hostel family.  Marinated pork, chicken and beef paired with salads and as much beer as you could drink under a lightning storm was the perfect way to end the first leg of the journey!