My last stop ever in Vietnam was the capital, Ho Chi Minh City named after the country’s adored former president.  Still known as Saigon to many I was taken aback at how little the city wowed me.  Compared to the rest of the country it is highly westernised (the only McDonalds in Vietnam is there!) and lacks the charm that Hanoi has.  I did however come to the conclusion that I was slightly biased in the Hanoi/HCMC debate considering I’d made the former my home for five months.  HCMC was a stop for a lot of the other interns so it was no surprise when I found out 2 would be there at the same time as me and at the same hostel.

I stayed at Saigon Friends Hostel, a pretty basic accommodation in HCMC centre.  The staff were friendly and very helpful but the hostel itself left a lot to be desired.  From the long climb upstairs with an 18kg suitcase and sparse 8 bed dorms to the lack of privacy (not to mention breakfast!) and the cleaner shouting at us, I’d be reluctant to go back.

I had limited time left in Vietnam so gave in and decided to go on a tour.  Two of the other interns were in the south at the same time and booked a tour of the Mekong Delta through their hostel.  This was something I was really excited about despite having no information about whatsoever.  The Mekong Delta is the mouth of the Mekong river which flows 4,500kms through 6 countries; China, Thailand, Laos, Cambodia, Vietnam and Myanmar.  Our trip began with a bus collecting us from our hostel and bringing us to another mini bus.  From there we drove for about an hour to the My Tho region to visit a very impressive religious site; Vinh Trang Pagoda.  There were giant Buddhas galore.  The beautiful statues surrounded a pretty temple which unfortunately we couldn’t go into but nonetheless it was an experience. After the pagoda we jetted off to a pier to be brought by speedboat to the oddly named Unicorn Island.  We sat around tiny tables while a Vietnamese woman poured us a drink; an amazing concoction of honey, boiling water and lime while our tour guide brought a tray from the bee hives to us!  Fast forward through the markets, puppies, watching coconut sweets being made, a crazy lunch with live performances and us (attempting to) hold a snake and we get to the not so good bit.  We waited around for our next form of transport, not knowing what it was and being heartbroken when we finally found out; a pony and cart.  The horses looked tired, overworked and definitely unable to cope with this weight of 5 people.  We were quickly pushed onto the carts as there was no other available transport, each of us fighting back tears and remaining silent for the 10 minute ride.  When we eventually reached the next activity our spirits lifted a little.  We were taking a little 4 person boat ride down the Mekong Delta.  In we hopped, tossing on our rice hats and enjoying the beautiful views.  However it wasn’t long before our 2 rowers (1 in the front, 1 in the back) started speaking and we only knew what was coming: tips.  Having lived in Vietnam for 5 months already I was all too familiar with the “tip us or we won’t take you to the bank” craic so we paid up and went on our not so merry way. 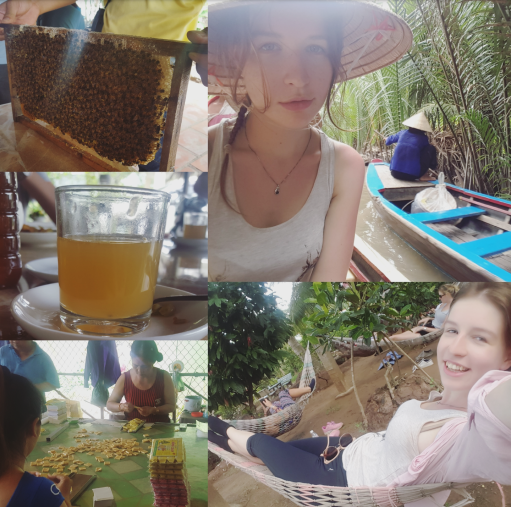 The rest of my visit flew by.  On my last full day I had breakfast with 2 of the guys from our dorm.  1 from Israel and the other from America, they had met on their travels and became inseparable.  The hostel didn’t provide breakfast so I was sent on a coffee run while they started on some vegetarian banh mis, in hindsight picking up breakfast would have been a lot quicker but maybe not as tasty.   Full on a breakfast of bread and veg I decided to hit up the War Museum.  And get my very first motorbike taxi.  It was exhilarating.  The skies opened and my driver sped around, onto footpaths, in between cars and eventually dropped me off after getting fairly lost.  The museum was one of the most harrowing places I have ever been.  Living in the country for so long made me feel especially angry and teary-eyed for the victims of this war and discovering that even now people were still being affected shook me to the core. 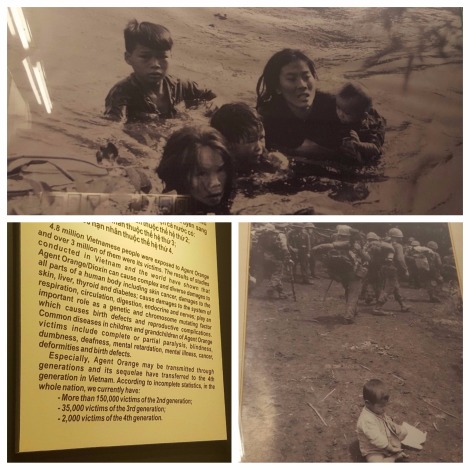 Though I was only in HCMC for 3 days I certainly took in as much as I could.  I visited the backpackers district and drank long island iced teas AKA pure gin, trawled through amazing food markets and met some great people.  I definitely ended my stay in Vietnam with a bang! 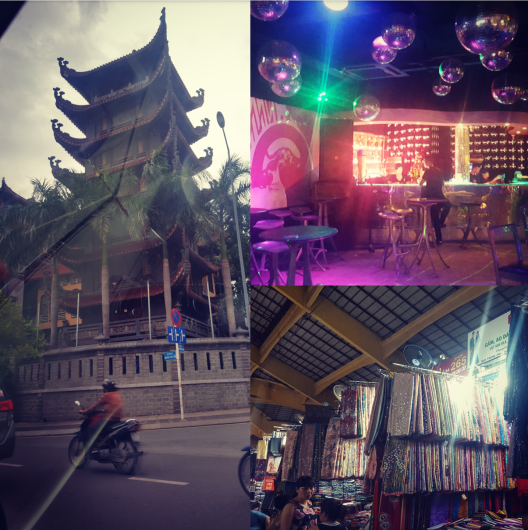